The Basics
I finally got around to setting up Security Onion (the best network security monitoring package available) to monitor my home network, only to discover that my Cisco 891 router doesn't support support the right form of SPAN. Here's how I worked around it. The topology looks like this: 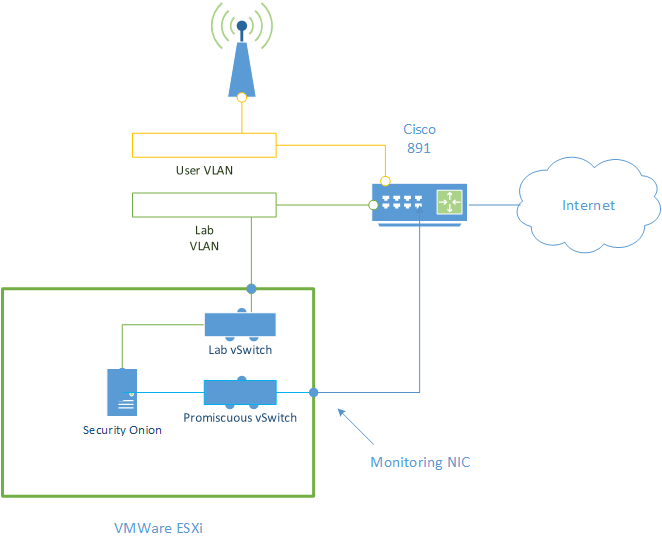 The 891 router has an integrated 8-port switch module, so the simple case would have been a traditional SPAN setup; something like this:

with the server's monitoring NIC connected to FastEthernet0.

The problem is that the 891 doesn't support using a VLAN as a source interface, and because of the way the embedded WAP works, a physical source interface won't work either. Hence, I turned to an obscure feature that's helped me occasionally in the past: Router IP Traffic Export. This is a feature for IOS software platforms that enables you to enable SPAN-like functions for almost any source interface.

This takes all traffic routed across the Vlan10 SVI and sends it out the FastEthernet0 interface, rewriting the destination MAC address to the specified value. I used the MAC address of my monitoring NIC, but it shouldn't matter in this case because the monitoring NIC is directly attached. If I wanted to copy the traffic across a switched interface, it would matter.

My ESXi host (a low-cost machine from Zareason with 32GB of RAM) has two physical NICs; one for all of the regular VM traffic (using 802.1q to separate VLANs if needed) and one for monitoring. The monitoring pNIC is attached to a promiscuous mode vSwitch in ESXi, which in turn is connected to the monitoring vNIC on the Security Onion VM. The effect of this is identical to SPAN-ing all the traffic from VLAN 10 to my Security Onion monitoring system; I get Snort, Bro, Argus, and full packet capture with just the built-in software tools in IOS and ESXi.

Oddity: RITE Capture, Tunnels?
Interestingly, you can also use RITE to capture traffic to a RAM buffer and export it to a pcap file. I don't understand why you would use this instead of the much more flexible Embedded Packet Capture Feature, though.

Another thing I've wondered is whether you could use a L2 tunnel to send the mirrored traffic elsewhere in the network. The destination interface must be a physical Ethernet interface, but it would be interesting to try using a L2TPv3 tunnel from an Ethernet interface to another router--I have no idea if this would work.

Production Use?
Cisco makes the UCS E-series blades for ISR G2 routers that let you run a hypervisor on a blade inside your router chassis. These things have an external Ethernet port on them, so you should be able to connect a RITE export interface to the external port on an E-series blade, and run Security Onion inside your router. I've always wanted to try this, but I haven't been able to get funding yet to test it.
Posted by Jay Swan at 9:54 AM

I love it when people take time out to post about technical stuff others are likely to have problems with. I really think that it is a form of altruism. This is a good post mate.

I'm so grateful for sharing!
take a look at my blog - https://nativecasinos.ca/ Wait for your feedback!

Hi thankks for posting this