Netmiko is a Python module by Kirk Byers that provides a wrapper around the Paramiko SSH module for doing screen scraping and CLI automation on network devices.

Paramiko has some dependencies that make installation on Windows a tad tricky. Here's a quick way to get it done:

Every so often I need to extract a subset of traffic from a set of rolling timestamped pcap files. One common place I do this is with Security Onion; one of the great features of SO is its full-packet-capture feature: you can easily pivot from Snort, Suricata, or Bro logs to a full packet capture view, or download the associated pcap file.

But what if you don't have an associated alert or Bro log entry? Or if you're doing pcap on some system that's not as user-friendly as Security Onion, but nonetheless supports rolling captures?

The way I usually do this is with find and xargs. Here's an example of my most common workflow, using timestamps as the filtering criteria for find:

Translated:
You can easily modify this workflow to fit other use cases.
Posted by Jay Swan at 11:35 AM 17 comments:

Want to know how many IPv4 nodes are in each of your VLANs? Use ADN:

Because I have yet to transition to a completely software-defined network in which everything configures itself (wink wink), I still have to do tasks like bulk VLAN changes.

Thanks to a recent innovation called ADN, or "AWK Defined Networking", I can do this in a shorter time window that the average bathroom break. For example, I just had a request to change all ports on a large access switch stack that  are currently in VLAN 76 to VLAN 64:

Then I copied and pasted the results into config mode. Back to lounging on the beach.

Not even any Python skills required!
Posted by Jay Swan at 10:39 AM 12 comments:

A quick example that shows how to use Elasticsearch bulk indexing from the Python client. This is dramatically faster than indexing documents one at a time in a loop with the index() method.

It took me a while to figure out how to search the not_analyzed ".raw" fields created by Logstash in Elasticsearch indices, using the high-level Python Elasticsearch client. Because keyword arguments can't have attributes, Python throws an error if you try it the intuitive way (this assumes you've already set up a client as es and an index as i, as shown in the docs):

Instead, you create a dictionary with your parameters and unpack it using the ** operator:

This produces the Elasticsearch query we want:

Experimenting with the CSR1000v REST API

This all started because we occasionally want to block traffic from an IP address or two for a short time. Our firewall is a pain to configure for this sort of thing: adding a drop for a single IP address literally takes 10 minutes. You have to open a fat client, create an object, add the object to a group, save the config, verify the config, push the config, etc.

I thought that SRTBH (Source-based Real-Time Black Hole) implemented by BGP would be the ticket: fast, easy, and theoretically easy to automate with the REST API in the Cisco Cloud Services Router 1000v. SRTBH is a simple and elegant way of dropping selected traffic on BGP speaking routers. In a nutshell:
The effect of this is that the edge routers see the iBGP route to the "bad" address as a /32 with a next-hop of 192.0.2.1. Because the next-hop for 192.0.2.1 recursively resolves to null0, the loose uRPF feature drops traffic from the bad host at the edge.

I followed the REST setup instructions, then wrote a simple CLI tool to make testing easier. It's easy enough to test the API with cURL:

but because the API requires that you obtain a temporary authorization token (demonstrated above) before doing anything interesting, writing the Python tool made sense.

Then the problems started: the REST API on the CSR1000v doesn't support tags on static routes. You can't add them, or even retrieve them. Here's what happens normally if you retrieve static routes:

If one of the routes has a tag, it throws an error:

You can't set tags either. Furthermore, the same thing holds true for static routes with the "name" argument. (Incidentally, the error message seems to indicate that the IOS XE API is written in Python.)

The problem with this is that without tags, there's no convenient way to filter the RTBH black hole trigger routes at the time of redistribution. You can't set route-maps on BGP network statements via the API either, so no joy there.

The best option to me seems to be to redistribute all static routes, but filter on prefix-length rather than tag:

But then you have to make sure that you never have any /32s that aren't trigger routes... a strategy which is prone to configuration mistakes.

Because SRTBH seems like a natural use-case for API automation, I hope Cisco fixes this soon.

[added]
Other interesting things I've found: the static route configuration API doesn't allow you to add equal-cost static routes. For example, if I already have a 1.1.1.5/32 route and I add another one, I get a 404:

The same thing goes for adding other items: I tried adding a name-server twice, and got a similar error. I would think that the API would be idempotent where possible (such as when adding a duplicate nameserver), and require clarifying attributes otherwise. With equal-cost static routes for example, it could throw a 40x unless an extra attribute like {"allow-equal-cost":true} is present in the POST request.
Posted by Jay Swan at 11:18 AM 8 comments:

To get the lovely Solarized theme working in Security Onion:

Problems with kvm-ok in VIRL with VMWare Player

I'm installing Cisco VIRL, and despite following the instructions regarding nested virtualization settings, the kvm-ok command was still complaining. I needed to edit the .vmx file for the VIRL VM and add/edit the following:

A while back, Chris Marget of Fragmentation Needed posted a run-down of his comprehensive and extremely clever network toolkit. Because I'm something of a weight weenie, mine is a lot more slimmed down. I thought I'd post it here: 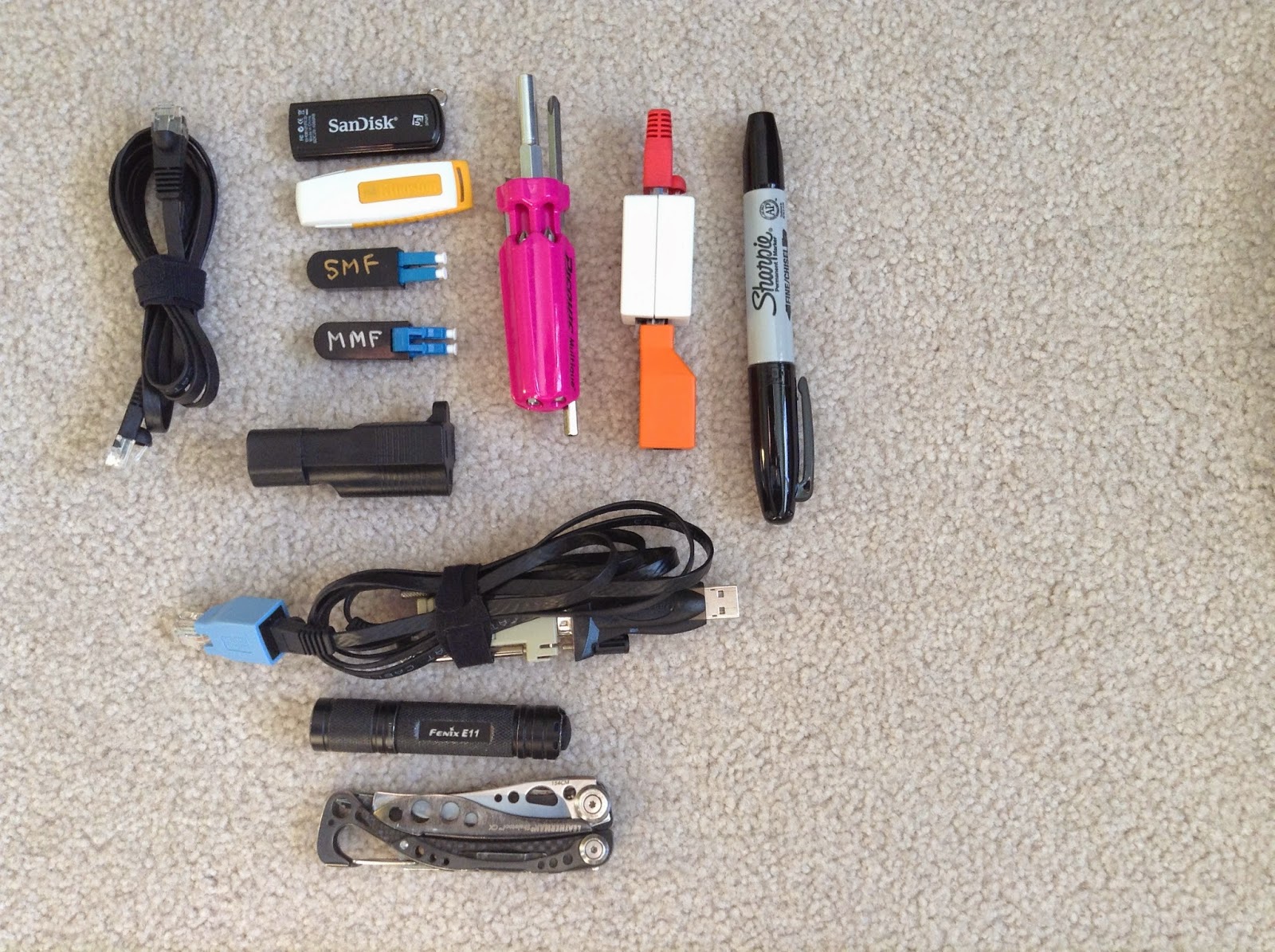 The console setup could probably be improved by adding a DB9 null-modem adapter. The coolest thing (IMO) that I'm missing from Chris's setup is the Bluetooth console adapter -- maybe one day.

The Fenix AA light and Leatherman Skeletool CX almost always live in a pocket rather than the kit and go with me everywhere. The kit all fits into a small zippered case that used to hold a Dell laptop power supply.

My main goal here was to have all the hard-to-find professional stuff in one small package. I have a separate "personal" kit that contains stuff like headphones, USB cables, and chargers for personal electronics.
Posted by Jay Swan at 10:45 AM 7 comments:

I'm a big fan of imposing artificial limitations on yourself in order to aid skill development. Here are some quick ideas:

Recently I did a Packet Pushers episode about log management. In it, I mentioned some of the custom Python scripts that I run to do basic syslog analysis, and someone asked about them in the comments.

The script I'm presenting here isn't one of the actual ones that I run in production, but it's close. The real one sends emails, does DNS lookups, keeps a "rare messages" database using sqlite3, and a few other things, but I wanted to keep this simple.

A simple message counting script like this lets you look at your data, and provides a simple platform on which you can start to iterate to find your specific needs. It also lets us look at some cool Python features.

I don't recommend pushing this too far: once you have a decent idea of what your data looks like and what you want to do with it, set up Logstash, Graylog2, or a similar commercial product like Splunk (if you can afford it).

That said, here's the Python:


I tried to make this as self-documenting as possible. You run it from the CLI with a syslog file as the argument, and you get this:

For Pythonistas, the script makes use of a few cool language features:

In the syslog counter script, we use a collections.Counter object as the type for our defaultdict. This allows us to build a per-syslog-reporter dictionary that shows how many times each message appears for each reporter, while only looping through the input once (line 66):

Here, the dictionary per_reporter_counts has the IPv4 addresses of the syslog reporters as keys, with a Counter object as the value holding the counts for each message type:

My Python-related posts seem to get the most reads, so here's another one!

A problem that comes up fairly often in networking is finding the number of occurrences of unique items in a large collection of data: let's say you want to find all of the unique IP addresses that accessed a website, traversed a firewall, got denied by an ACL, or whatever. Maybe you've extracted the following list from a log file:

and you need to reduce this to:

In other words, we're removing the duplicates. In low-level programming languages, removing duplicates is a bit of a pain: generally you need to implement an efficient way to sort an array of items, then traverse the sorted array to check for adjacent duplicates and remove them. In a language that has dictionaries (also known as hash tables or associative arrays), you can do it by adding each item as a key in your dictionary with an empty value, then extract the keys. In Python:

Python has an even better way, however: the "set" type, which emulates the mathematical idea of a set as a collection of distinct items. If you create an empty set and add items to it, duplicates will automatically be thrown away:

Or, if you have a list built already you can just convert it to a set:

Python also provides methods for the most common types of set operations: union, intersection, difference and symmetric difference. Because these methods accept lists or other iterables, you can quickly find similarities between collections of items: